Q: You mention a connection with Disney studios, even before Jungle Book, can you tell us about that?

JD: It’s so deep for me with Disney because I was basically born into it. My dad worked for Disney for 40 some odd years and I grew up on that lot as a kid, playing with the Disney kids and their Go Karts and all the greatest toys in the world. We’d go to the studio on weekends and we’d bump into Walt Disney—it’s in my DNA. That extended family was also my family, it’s ingrained in me, every bit. 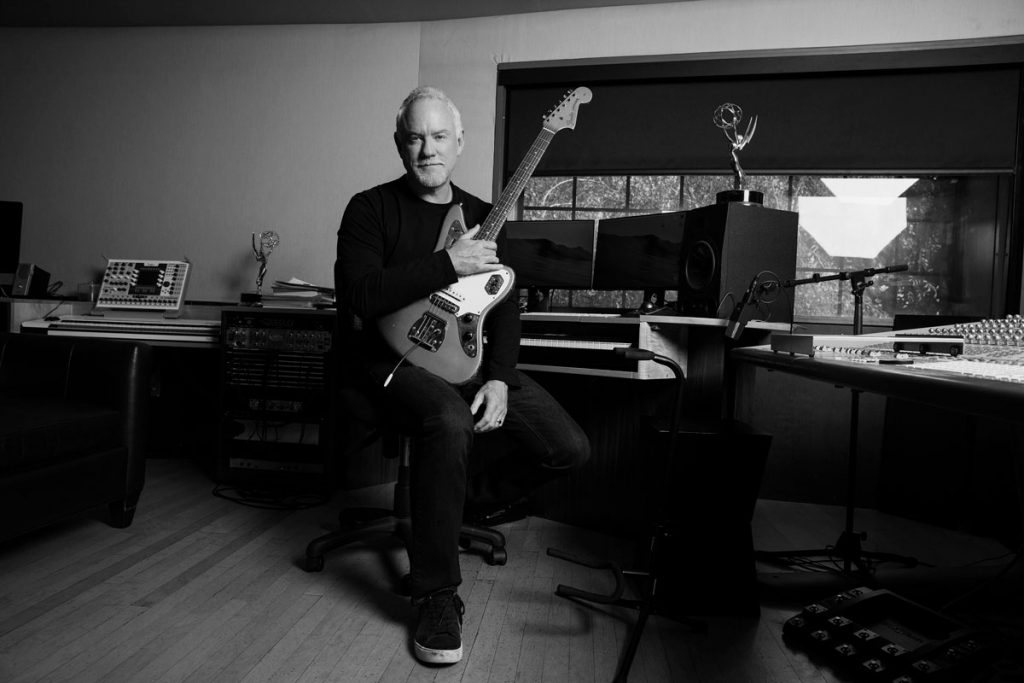 Every weekend my dad would bring home Disney films to look at, and we’d have movie night at my house, the neighbor kids would all come over and we’d watch 16mm prints of Bambi, Pinocchio, and films that had just come out. We had a projector and my dad taught me how to thread it, I was the one putting up the reels—Disney films, true life adventures, nature films—that’s how I got interested in film. I was fascinated at an early age with the music with the moving images.

When I was a little older, maybe 6 or 7, my dad knew I had an aptitude for music (I was starting to play guitar), and he asked Dick Sherman if he could meet me and Dick said, “Bring him in and let the kid be with us for a day.” I was the shyest kid in the world, and I sat there in the studio office watching the Sherman brothers banging away on that little upright piano for hours writing songs, like a fly on the wall. I think I said maybe two words the whole time, I was so quiet that when lunchtime rolled around, they forgot I was there in the back.

Working on Jungle Book was personal to me, like a coming of age with the DNA of Disney. It integrated everything about me, my history, the relationship with the studio and with my dad—it was a huge personal journey. The last couple pieces of Jungle Book, the orchestra was in tears, Dick Sherman came out, and there was a huge round of applause, it was a big coming home.

Q: What was your first big break in film?

JD: Liar Liar was a big break for me and it came in 1997. My friend, a composer Jason Howard, was going to do the movie and couldn’t do it. He was great about it, he not only recommended me, but took the first few meetings. Tom Shadyac took a leap of faith on me with Liar Liar, and it was a huge movie. After that I did I Know What You Did Last Summer, so I had a big comedy that year and a big thriller. Of course, as artists, we think, “I’ve made it.” It was a good year. That led to many things, Elf, Bruce Almighty, Evan Almighty (the spin off), it was a really rich period in my life, the late nineties. I was a workhorse, doing all sorts of stuff.

Q: You have a huge body of work, across many genres—comedy, thriller, adventure—how did you get involved with Passion of the Christ?

JD: It was 2003 or 2004, and I was busy doing comedies, and one day my producer friend Steve called. He had been working on Passion of the Christ. He said, “I’m working on this thing, it’s kind of heavy and kind of deep, we don’t know what to do with the music. Would you watch it?”

So, my wife Lola and I sat in here in the studio and watched it and we were just terribly moved by it. I didn’t know what to make of it all, there had not been a film like that ever, it was so visceral and in your face and graphic and yet so deep, faith-wise.

I called my friend Steve and said, “This film is unbelievable, what do you want me to do?” 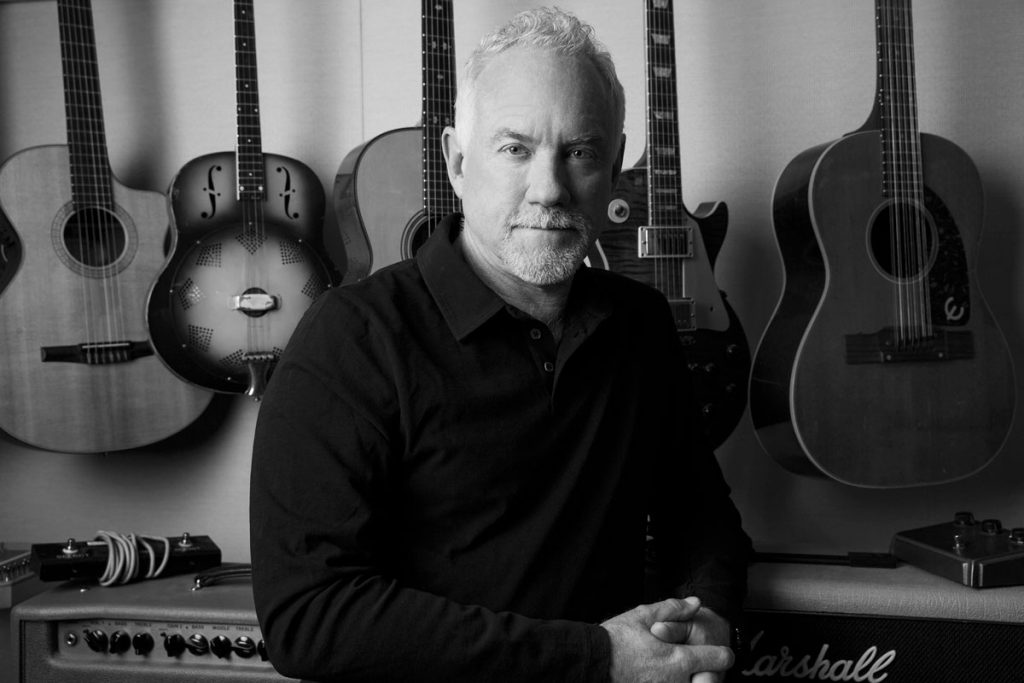 They had temp music in it, and I hated the music, but loved the film. I thought, maybe I’d write something. I spent a weekend coming up with stuff, and I called a friend to come over, a singer, and a couple other people and we created this trailer, a three-minute piece of music that was aggressive and percussive and ethnic, but in a contemporary way.

I did three or four more pieces, and then Steve said, “Mel wants to come over.” And all of the sudden, there he was, Mel Gibson showed up at the studio. I think he came on a motorcycle with a backpack. I played the music I’d written for him, and I had no idea if he liked it or not. A day later or so, Steve called and said, “Mel loved it. When can you start?”

That began a journey with Mel that was wild and wonderful. He came over every few days and we would work. We recorded the score in London. He had no idea it was going to be a massive hit. And it was massive.

Q: Talk about how you got started working with Jon Favreau?

JD: We started on Elf together. New Line was making Elf and by then I’d become known for comedies, and Jon had never done a big studio movie, this was his first. I met him briefly, and I got the feeling it went well. I got hired. This was Jon’s first major film with an unlimited budget, and he’d never had a composer before, he’d always done needle drop stuff, which is great. The first couple meetings we had, he asked, what do we do? I told him I’d write pieces and he’d come over and I’d play them for him mocked up. I remember I wrote a piece early on for a scene in the movie where Elf has to travel to New York, it’s a big moment, a sort of montage. I came up with a tune, and played it for Jon and he immediately went, “What’s that?” I said, “Well, it’s Buddy’s theme.”

It was that song that broke the ice with us, and it became a great working relationship. We did Zathura, which is a really good film, and Iron Man 2, and then he went away and did Cowboys and Aliens, and came back to me and wanted me to do Jungle Book. We’ve done four films together.

Q: Were there any special moments while you were working on Jungle Book?

JD: So many. Getting to the place of recording the score was huge, it was two years of my life, and there were some unorthodox methods. We actually recorded New Orleans jazz musicians playing Bare Necessities, it was so organic and real. We were in this teeny tiny studio, practice started at 10am, and the musicians strolled in at 11am. By 1 or 2pm, the band was warmed up, and then Chris Walken and Bill Murray came in to do their songs, and Bill was running around joking with everybody. I rarely get to work with actors while recording music, but we had to do it early on because they were so integral to the film. Next I went to New York to work with Scarlett Johansson, and she’s a total pro, very sweet. I was like, pinch me—it was that kind of job.

One day Favreau called and asked me if I thought Dick Sherman would be willing to write a new lyric for I Wanna’ Be Like You. He said, “Should I call him?” I said, “Yes, I think he’d love that.” So, Dick came in to the studio and Jon explained what he wanted to do with the new lyric that had the word “gigantopithecus” in it, which was an ape that lived sometime during the Ice Age. Dick just started scribbling madly on a piece of paper, and we sat there watching him write lyrics—the man that wrote Supercalifragilisticexpialidocious—and by the end of it he had three or four rhymes for “gigantopithecus.” Jon and I just looked at each other and were like, “Wow…did that just happen?”

Q: What are you working on currently?

JD: I have exciting film and TV projects coming up in 2017 and 2018, including some live performances that I’m really looking forward to, like the Passion of the Christ oratorio, and the 200th anniversary of the writing of Silent Night, where I’ll be writing and conducting a piece for the Austrian National Opera Orchestra that tells the story of how the song was written.